Menu
Interact
As reported by the Guardian in 2010:
U.N. URGES GLOBAL MOVE TO MEAT AND DAIRY-FREE DIET
As the global population surges towards a predicted 9.1 billion people by 2050, western tastes for diets rich in meat and dairy products are unsustainable, says the report from United Nations Environment Programme's (UNEP) international panel of sustainable resource management.

It says: "Impacts from agriculture are expected to increase substantially due to population growth increasing consumption of animal products. Unlike fossil fuels, it is difficult to look for alternatives: people have to eat. A substantial reduction of impacts would only be possible with a substantial worldwide diet change, away from animal products." 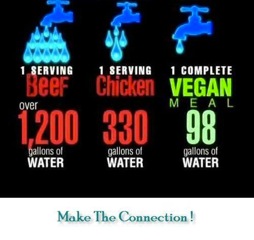 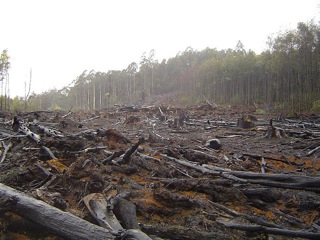 1. Deforestation – Farm animals require considerably more land than crops to produce a given amount of food energy. In Central America alone, 40 percent of all rainforests have been cleared in the last 40 years for cattle pasture to feed the export market, often for U.S. beef burgers. The World Hunger Program calculated that recent world harvests, if distributed equitably and fed directly to humans as opposed to livestock, could provide a vegan diet to 6 billion people. 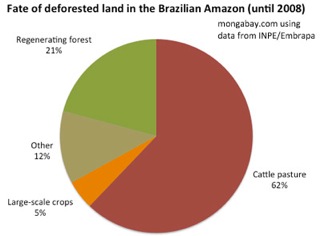 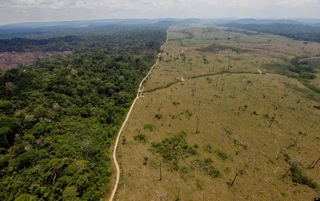 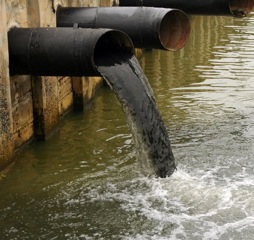 2. Fresh Water – Without a doubt livestock has one of the largest water footprints on the planet. It may be hard to believe, but the standard American diet requires a whopping 4,200 gallons of water per day (including animals’ drinking water, irrigation of crops, processing, washing, etc.), whereas a vegan diet only requires 300. The easiest way to reduce demand for water is to eliminate the consumption of animal products.


3. Waste Disposal – Today’s factory farms house hundreds of thousands of cows, pigs and chickens and in turn produce astronomical amounts of waste. In the U.S. these giant livestock farms generate more than 130 times the amount of waste that humans do. This waste has polluted thousand of miles of rivers and contaminated groundwater, killing marine life and creating huge dead zones.

5. Food Productivity – The food productivity of farmland is quickly falling behind population growth, and the only option available to us short of stabilizing population is to cut back on meat consumption and convert grazing land to food crops. In the U.S. an estimated 56 million acres of land are producing hay for livestock, and only 4 million acres are used to grow vegetables for human consumption.
6. Global Warming –  The number one reason for global warming: livestock production. In a 2006 report, the U.N. Food and Agriculture Organization (FAO) concluded that worldwide livestock farming generates 18% of the planet's greenhouse gas emissions — by comparison, all the world's cars, trains, planes and boats COMBINED only account for 13% of greenhouse gas emissions. (TIME 2006)

7. Loss of Biodiversity – Poaching and the black-marketeering of bushmeat is becoming a growing problem as our planet becomes more and more overcrowded and poorer populations venture into wildlife reserves to kill everything from elephants and chimpanzees to bonobos and birds. Hunters are using logging roads, which facilitate a more rapid invasion, that have been opened up by big multinational companies to poach endangered animals to sell to people in the cities.

8. Grassland Destruction – As the herds of domesticated animals expanded, the environments on which wild animals such as bison and antelope used to thrive were replaced by monoculture grasslands to cater for large scale cattle grazing. Grassland has suffered a massive loss of life. What was once a rich and diverse ecosystem is now is a single species monoculture.


9. Soil Erosion – With 60 percent of the United States’ pastureland being overgrazed, the acceleration of soil erosion and degradation of land is an increasing concern. It takes approximately 500 years to replace just one inch of precious topsoil. While fertilizers may be able to replace a small amount of nutrient loss, the large inputs of fossil energy to do so is completely unrealistic and unsustainable.

10. Lifestyle Disease – The excessive consumption of meat and dairy in developed countries combined with environmental pollution and lack of exercise is causing a wealth of preventable health problems such as heart disease. While western civilizations are dying from strokes, cancer, diabetes and heart attacks which are all strongly linked to over-consuption of meat, poor people in Third World countries are dying from

With the threat of rapid population growth — the current U.S. population is an estimated 285 million and is projected to double in the next 70 years — an even greater stress will be placed an our already limited resources, all of which will have to be divided among even larger numbers of people.